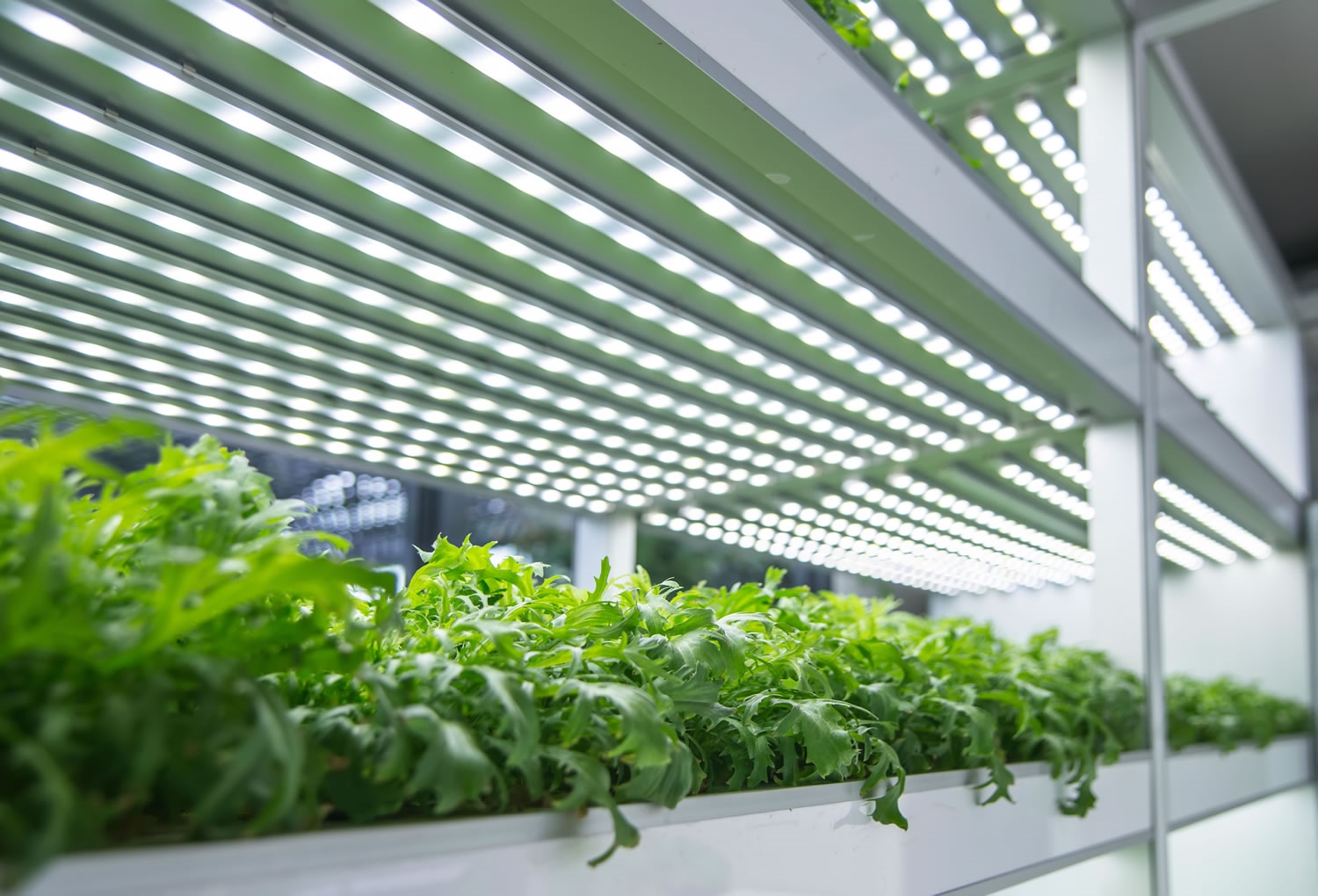 Techspray was approached by a grow light manufacturer that was struggling to produce LED light fixtures with good reliability in harsh conditions. Their solution was to apply conformal coating to their printed circuit board assemblies (PCBA), but that led to a host of complications, which included shutting down their production line for the day due to noxious fumes.

Fine-L-Kote LED2 Conformal Coating was the product that eventually saved the day, but only after rigorous qualification testing.

Imagine taking a sensitive electronic device, say your laptop, and placing it in a steam bath. As if that weren’t challenging enough, add caustic, corrosive fertilizing chemicals to the mix. The obvious solution is to coat the electronic assemblies with conformal coating, which is basically a shellac for circuit boards (a bit of an oversimplification, but more details on conformal coating is to follow). The problem is you run the risk that it will dim the light intensity and shift the color, negating years of testing to optimize your light’s performance on plant growth.

Techspray was contacted by a small but well positioned manufacturer of LED grow lights that was attempting to solve those exact problems. Their first choice of conformal coating was naturally from one of the top suppliers of silicone resin. Silicone resin (SR) is the natural choice for coating grow light electronics because it is very hydrophobic (repels water).

From their initial qualification testing, they decided that a thicker than normal cured coating provides them the best overall protection. What wasn’t initially taken into account was the solvent used to thin the silicone resin to a workable consistency.

The competing silicone conformal coating being tested had a high concentration of toluene, which is considered highly toxic and has a very strong odor. When the coating was applied, there were soon a number of complaints of the strong smell and headaches up and down the assembly line. As time went on, it became so disruptive they shut down the production line for the day. Not exactly the best results when time literally equals money!

Before we get into the final solution, how about a little more detail on grow lights in general…

What Are Grow Lights Used For?

Grow lights are electric, artificial light sources used to grow plants when natural sunlight is either not available or does not offer enough control. Grow lights either attempt to mimic the light spectrum of the sun, or the light is fine-tuned in either the spectrum (color) or intensity to achieve specific results.

The global market for LED grow lights is rapidly expanding because of booming demand in the indoor farming, commercial greenhouse and vertical farming segments. The legalization of cannabis in many states in the United States and countries around the world has driven much of the increase in indoor farming. In 2020, the market size had an estimated value of $1.28 billion, and is projected to increase to $12.32 billion by 2030. [2]

How Do Grow Lights Work?

Since individual LEDs usually emit a narrow range of colors, arrays of multiple LEDs are used to either mimic the natural white light of the sun, or shifted in more the red, blue or green direction, depending on the benefits on a specific plant’s grown cycle. LEDs offer a huge value in control, which has led to large advances in productivity of commercial indoor agriculture. Many lighting products consist of a set of LEDs in multiple colors, with electronic controls to shift which LEDs are active, changing the overall color of light produced.

Importance of Light Intensity and Color on Plant Growth

Photoreceptors in plants are activated by varying colors along the light spectrum, impacting growth characteristics like fruiting, rate of grown, root development, plant health, flavor, nutrition, etc. [3] Small changes of as little as 10-20nm in the light color can produce major changes in both plant growth and edible product produced.

Another study published in the Journal of Experimental Botany (April 2017) made the point that the importance of green light should not be overlooked. Green has long been thought to have minor importance in biology because much of it reflects off of plant surfaces (which is why they look green). This research had shown the absorption of green light actually helps stimulate photosynthesis, improving carbon gain and possibly crop yield. [5]

To manufacture LED grow lights, individual LEDs have to be attached (usually with solder) to a printed circuit board (PCB). In theory, this is a very simple electronic device that should be easy to assemble and be highly reliable. The harsh reality is the extreme environment of indoor agriculture. When you introduce heat, moisture, and caustic, corrosive fertilizer, electronic reliability becomes much more challenging.

In short, you really need to keep the inner workings of electronic devices clean and dry.

There are several strategies that can be implemented to ensure grow light reliability:

Conformal coating is a special polymeric film forming product that protects circuit boards, components, and other electronic devices from adverse environmental conditions. These coatings ‘conform’ to inherent irregularities in both the structure and environment of the PCB. They provide increased dielectric resistance, operational integrity, and protection from corrosive atmospheres, humidity, heat, fungus, and airborne contamination such as dirt and dust.

In relation to grow lights, several conformal coating properties rise to the top of the priority list:

Conformal coatings generally contain either acrylic resin (AR), silicone resin (SR), or urethane resin (UR). Engineers specify the type of coating depending on the environmental issues that need to be mitigated. In the case of grow lights, silicone-based conformal coatings are ideal because they are hydrophobic (repel water), have good chemical resistance (i.e. against caustic fertilizers), do not yellow over time (shifting color being transmitted), and generally have a higher heat tolerance compared to other coating types.

After restarting their grow light assembly line, the project managers were very determined to find a conformal coating that meets all their performance criteria, but without the noxious chemicals. Luckily Techspray was able to offer an ideal solution off-the-shelf, Fine-L-Kote LED2 (part #2125).

Cured coatings are hydrolytically stable and retain their physical electrical properties after high temperature and humidity exposure, without interfering with light wavelength or intensity.  Fine-L-Kote LED2 will not stress delicate components.

Fine-L-Kote LED2 does not contain HAPs like toluene, xylene, or MEK, so it is much safer on personnel.

Of course marketing bullet points are great, but qualification testing was required to ensure the reliability of their grow lights were improved without affecting light transmission:

IPC-CC-830B is a battery of tests, some are pass-fail and others provide data that can be referenced and compared. Qualifications include coating appearance, insulation resistance, fungus resistance, flexibility, flammability, moisture and insulation resistance, thermal shock, and hydrolytic stability. Fine-L-Kote LED2 passed all of the above qualifications. UV fluorescence is normally included in IPC-CC-830B, but is not applicable for this particular coating. UV brightener, which glows under a black light, is often added to conformal coating formulas to aid QC inspection. Techspray did not include UV indicator in Fine-L-Kote LED2 because of the potential of negatively impacting light transmission across all spectrum including ultraviolet. The UV indicator absorbs the invisible UV light and re-emits it at a longer wavelength in the visible range, allowing you to see it for quality control inspection. So, if a plant benefits from a specific wavelength of UV light, a UV indicator could negate that benefit.

3rd party testing was performed on uncoated LEDs (control) and coated LEDs (test) to compare the effect on intensity (mW/nm) and color (nm). A Spectroradiometer and integrating sphere were used to measure light output, correlated color temperature, chromaticity coordinates, color rendering index, and the spectral distribution for each LED.
Fine-L-Kote LED2 was shown to have almost no impact on either intensity or color (see diagram below).

Accelerated corrosion testing enables manufacturers to evaluate new coatings in a controlled environment. This avoids learning about reliability issues the hard way -- from field failures. LED fixtures were run in a salt fog chamber with a standard 5% NaCl solution for several weeks. LED performance was measured before and after the test and compared, looking for signs of degradation. Fine-L-Kote LED2 was able to withstand this extreme test of corrosion resistance.

Fine-L-Kote LED2 was tested using the Cree compatibility testing kit and standards. Cree is one of the top manufacturers of LEDs, and has developed the kit and process to help customers prevent unexpected problems. The test kit includes MX-6, XP-E, XR-E and XHP50 LEDs.
The LEDs are attached to a PCB, coated, connected to a power supply, and the test is run for at least 6 weeks (1000 hours). Fine-L-Kote LED2 passed the Cree compatibility test for all LED components and is listed on the Cree XLamp LEDs Chemical Compatibility guide (CLD-AP63 Rev 6A Aug 2018). [7]

After 1-2 years of qualification testing and logistical work, Techspray Fine-L-Kote LED2 is improving reliability of tens of thousands of grow lights per month, including those in the US, Mexico, and Asia.

Opportunities abound in the grow light markets, but competition is fierce, so product quality and reliability is critical to success. Techspray Fine-L-Kote LED2 is a proven competitive advantage for grow light manufacturers, allowing their products to withstand the harsh indoor farming environment and continue to optimize agricultural output.

For more information, contact a Techspray application specialist at 678-819-1408, info@itwcce.com, or to go www.techspray.com.

For more information on conformal coatings, check out our Essential Guide to Conformal Coating.

[6] Biological and Applied Sciences, Feb 2012, by George Zervoudakis, “influence of Light Intensity on Growth and Physiological Characteristics of Common Sage”.